The Future of Real Estate in the Philippines

Share the #GYMBFF:
The Philippine economy is the fastest growing in the Asian region, mentioned by International Monetary Funds (IMF, 2014). However, the concerns were raised that in South East Asia, the strong growth combined with low interest rates had led to fears of a property bubble in Manila (CERB, 2014). However, the local real estate brokers and agents remain overwhelmingly positive.

The recent study by a global property portal, Lamudi, has shown that 92% of the local brokers described their outlook of the Philippines property market over the next 12 months as very positive. Those surveyed nominated the country’s economic outlook as the biggest constraint on the real estate sector, reflecting current concerns about a potential slowdown. The prospect of political change and limitations on foreign investment also emerged as key constraints on the property sector. 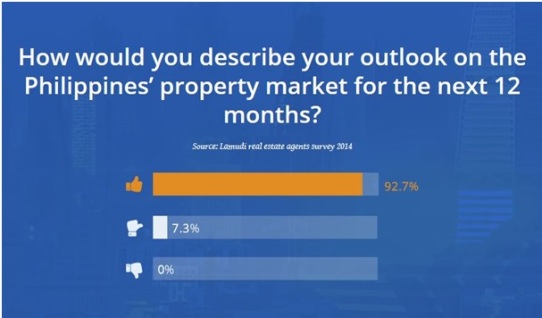 Another good news, in 2015, the GDP is predicted to be rising! As compared to other emerging countries in Southeast Asia region, the Philippines’ GDP will be on the highest rank!

Lamudi also discussed about the future of the property market with Jose Sales, Head of Research and Consulting at Pinnacle Real Estate Consulting Services. This interview will be valuable for all the property investors.
Q: Do you expect the Philippine growth story to continue?
A: For this year, GDP growth is projected to be slightly lower than last year. Even though we’re slowing down a bit, the Philippines is still achieving higher growth compared to its neighbors. It would be tough to sustain this with the uncertainty surrounding the upcoming national elections in 2016, and transition of power. Business process outsourcing (BPO) is here to stay. Overseas Filipino Worker (OFW) remittances are here to stay. These are keeping the economy afloat and not just afloat, but growing faster compared to our neighbors.
To read the full interview and more of this research, visit whitepaper done by Lamudi.
As a result of this research, the future of the property market in 2015 will be on a bright side!

What's on your mind? Cancel reply